Yayoi Kusama’s Artworks Come to Museum MACAN Jakarta – Have you heard about Museum MACAN before the art exhibition of Yayoi Kusama? If you have not, well, you are not alone!

The current exhibition is from Yayoi Kusama, Japanese artist, who is opening her first major solo show in Indonesia entitled “Life is The Heart of A Rainbow”. She is labeled as The Queen of Polka Dot since most of her artworks dominate the pattern.

Yayoi Kusama: Life is The Heart of A Rainbow

Yayoi Kusama is no stranger when it comes to artistic world, with her personal eccentricities, she has become one of the most recognizable artists in the world.

Being in the position where she is now is not easy. When she was young, she started seeing the world through a screen of tiny dots. They covered everything she saw – the walls, ceilings, and even her own body.

In 1977, she moved permanently into a psychiatric hospital and built her studio across the street after leaving United States.

During this time, her earlier motifs such as dots, flowers, and pumpkins reappeared as her practice underwent several shifts.

It was during this period that she also embarked on a literary journey resulting in a significant number of poetry, prose, and novels where you can buy all of them on the counter lobby.

To enjoy Kusama’s masterpiece, you must spend IDR 100,000 for 2 hours only! I arrived there along with some friends around 11:00 am and got the session at 04:00 pm. It was a long time lag, though, so we decided to visit Central Park Mall in Jakarta Barat for killing time.

The ticket was quite pricey I would say, making us have some high expectation on this exhibition since the given time session was so short.

Well, we started feeling disappointed when all photography gears were not allowed inside. I had researched some articles stating that visitors were allowed to bring professional cameras there, this time, everything was unexpected.

No backpacks, drinks and snacks, and also shoulder bags were allowed. You could only bring your pocket and smartphone inside, other than that should be kept on a deposit counter.

Since we came to this museum still during Ramadan Holiday, the museum was full of people literally. It was so difficult to move and took some time to pass the entrance line.

In two hours, you would get used to some prohibition sentences like – no sitting, no touching, no leaning, no flash, and no taking photos for some objects in the museum, duh!

Well, it was quite understandably as some of Kusama’s artworks had been destroyed by “Instagram-crazed” visitors who were so disobedient, starting from Washington, US to Jakarta, Indonesia.

That’s why you should extra carefully move here and would find many staffs keeping an eye on every displayed artwork.

Some attractions that we experienced were Narcissus Garden, The Spirit of the Pumpkins Descended into the Heavens, some series of My Eternal Soul painting, Obliteration Room, and Floating Garden.

Narcissus Garden was first presented at Venice Biennale in 1966. Narcissus Garden is Kusama’s form of critique towards commercialism in art. There are around 1,500 metallic balls in this installation!

The queue was quite long but quickly unraveled. Each person only had 15 seconds to get their self captured, so be careful not to hit the metallic balls.

The Spirit of the Pumpkins Descended into the Heavens was the next attraction. This is the kaleidoscopic visual of pumpkins – one of Kusama’s signature motif. Bear in mind not to use flash for photography and not to wear shoes inside. So, please take your shoes off first!

This pumpkin installation made us even more disappointed as the staffs told visitors to have 1 minute for each group inside. We spent about 15 minutes queuing and ended up only about 30 seconds there. They asked us out even before finishing our camerawork.

At that time, it was almost at 05:00 pm, we only had one hour left and were still on the first floor out of 3!

We continued to queue to the ever-so-famous attraction of all, Infinity Mirrored Room – Brilliance of the Souls, that what every visitor wanted to take pictures of.

Infinity Mirrored Room’s queue was bloody long and plated. We spent about 30 minutes and almost reached nowhere, probably about a quarter of the overall queue length.

We gave up on this. I asked one visitor who just finished from Infinity Mirrored Room, she said that she spent willingly more than an hour just to have some picture inside the installation, duh.

It was almost 05:30 pm, we decided to reach the second floor to visit Obliteration Room. What we saw was the same case, the queue of many people. Well, at least it wasn’t as bad as what we had experienced for Infinity Mirrored Room which ended up with a failure.

Obliteration means the complete destruction of every trace of something. Kusama’s idea is to invite every visitor to join in and have fun covering all the furniture and walls in this living room with bright colorful dots!

After wasting 30 minutes just for queuing, my group was given 2 sheets of colorful dot sticker and 2 minutes time there. We had some fun to find some blank spot for our stickers.

Time’s up, we got down and visited Floating Garden – the Children’s Art Space. This isn’t one of Yayoi Kusama’s artworks.

In collaboration with Entang Wiharso, the room is decorated with his commissioned murals and sculptures where children can experience art and be visually stimulated through thought-provoking activities.

If you bring kids to the museum, you can use this space to express their interest in arts or just to unwind a little.

Frankly speaking, my friends and I felt quite disappointed to the exhibition. Not only was the given time too short, but also we spent our money more into queuing for the attractions instead of enjoying the artworks. There was also time corruption that made us disappointed.

Too many people gathered at the same session made the visitors feel hurried as they were afraid of not getting chances to the attractions.

Because of the never-ending queuing, I spotted that some elderly people were difficult to find chairs to sit. I could feel them since I am as a young woman, was so tired standing for the queue, what about them? It was even worse. I saw unhappy expressions of them.

For those who are still willing to visit the museum especially for Yayoi Kusama’s exhibition, I suggest you to take a leave. Don’t count on the weekends if you don’t want to end up experiencing journey like me.

Yayoi Kusama’s Life is The Heart of A Rainbow exhibition will end on September 9th, 2018.

Advantages and Disadvantages of Museum MACAN

1. Quite pricey with short period of session
2. Need to improve the supervision in order to make visitors more comfortable
3. Long and plated queue almost in every attraction
4. Be consistent. Some of the visitors disobeyed the rules and could pass the museum bringing big backpacks 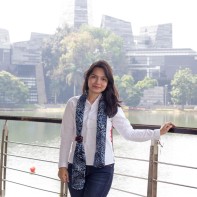 ABOUT ME
Welcome to my travel blog. First and foremost, I am a Sagittarius girl that naturally loves traveling. For me and I think for everyone else, to travel is to live.
Contact us: hello@ladypinem.com
FOLLOW ME
© 2017 • Lady Pinem | Coded & Designed with ❤ and ☕ by Walter Pinem